I find it interesting how the Erlang BEAM engine represents data in memory.

This is the in-memory layout of the Erlang list "phi".

As a reminder, Erlang treats a string as a list of small integers; 'p', for instance, is 112. Don’t worry too much about the bitwise details of the diagram - we’ll cover those later on.

CAR and CDR denote the head and tail of the list, respectively (the Erlang ‘C’ source defines CAR and CDR macros, so I’ve adopted the same Lisp-y terminology).

This is why Erlang developers routinely store strings as Erlang binaries. For more information, see the Erlang Efficiency Guide.

Let’s dig a little deeper into the memory layout.

Erlang data is represented internally by a typedef named Eterm.

Tagged values are a clever way of saving memory by taking advantage of memory alignment rules, and using a word as either an immediate value or a pointer, depending on its tag.

An immediate value is a value that is in the word itself, as opposed to one obtained through pointer indirection.

A tag is a fixed number of least significant bits in the word, which are reserved for identifying attributes of the tagged data. Although this reduces the size of the data that can be stored in the word, it more than makes up for it by avoiding or reducing the overhead of pointers and descriptors.

Taking advantage of this, system programmers use these zero-bits to store information about the data, which could be an actual value like an integer, or it could be a pointer. When using a word, the bits are set at the time its data type is decided. If it’s a pointer type, those bits are masked off (zeroed) when the word is used (otherwise it would point to the wrong address).

There are 4 primary kinds of Eterm:

Here’s my view of what the various flavors of Eterm look like for a 32-bit version of Erlang. 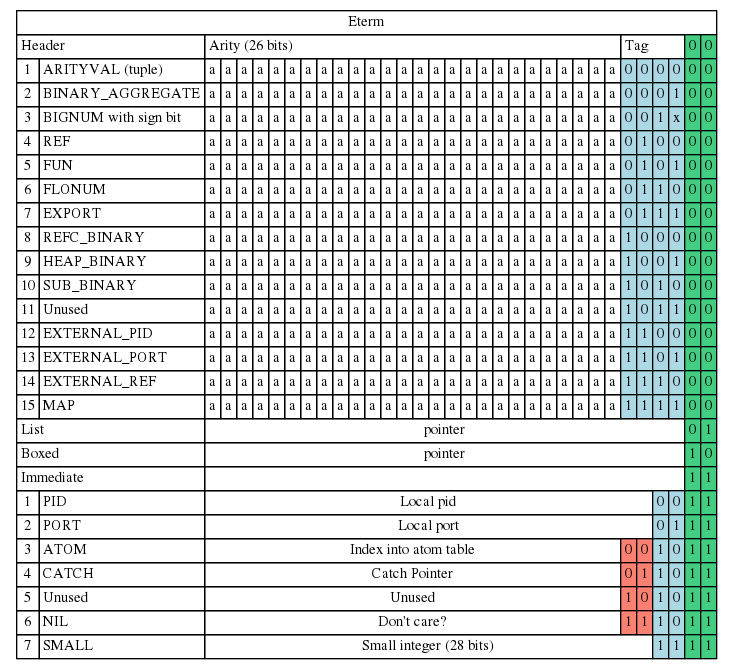 Note the 4 primary types we just mentioned, namely Header, List, Boxed, and Immediate. They are identified by the 2 least significant bits (for example, Header is binary 00, and Immediate is binary 11).

A tuple is a fixed-size collection of values, somewhat like a struct in ‘C’.

A tuple is also a boxed value, so it consists of a Boxed pointer (1 word) to an ARITYVAL header (1 word), after which appear the elements of the tuple.

The arity part of the ARITYVAL header is a 26-bit (on a 32-bit system) integer value containing the number of elements in the tuple. It follows that the size of a tuple is 2 words + the size of the data following the header.

This is illustrated by this tuple of characters (integers, really).

A binary is an interesting Erlang data type, because there is more than one flavor:

There are two types of port: internal and external. An internal port refers to a port on the local node, while an external port identifies those on remote nodes.

It gets interesting when we combine the data types. We’ll look at a tuple of lists, and a list of tuples.

This information is based on an analysis I did of the Erlang C source code on github circa June 2016. In particular, I looked at erl_term.h and sys.h. I did my best to avoid mistakes, but I’m not an expert on Erlang internals, so YMMV.